Mensa and Migraines and Math (oh my!) 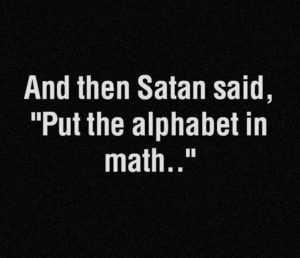 On the urging of my friend Steven, I recently decided to take the Mensa test. I was on the fence about it for a long time, primarily because after 30 years of not needing math other than basic investing, calculating a waiter’s tip, and grocery shopping (which price per unit is better?), I knew that math was going to be my downfall. But, I thought, if there’s not THAT much math, maybe my strengths in the other areas will even it out. And if not, well, I have lived a very full life thus far without Mensa.

I have been ill for every major test I have ever taken. When I was in high school and took the SAT, I had the flu. I took the English section first, then Spanish, and by the time I took the math, I must have had a fever of 103. At the end of the math section, I started filling in the answers with abcddcbaabc, etc. just to finish the exam. And then I spent the next two days in bed. I managed to pull off somewhere around 500. Not great, but not terrible. Imagine how I could have done without the guesswork! Maybe. Realistically, this was probably the best I could have done anyway, considering I never went past basic high school geometry, and in that class I got a D both semesters (I sparkled with Cs in Algebra I the year before). My combined SAT scores were about 30 points too low to qualify for Mensa, but I did get into UCLA.

When I needed to take the GREs after college, I hadn’t had math since that ill-fated geometry class my sophomore year of high school seven years earlier, so I spent three months of Saturdays in UCLA’s Powell Library with a GRE prep book and taught myself how to do the math, including all sorts of algebra I’d never had before. Miraculously, I actually learned how to do it, and for the first time in my life, I didn’t feel stupid when it came to math. On the GRE math, I got 520, and considering the aforementioned math history, I felt pretty good about that. Oh, and did I mention that the flu and I were bed partners for that exam as well? My combined math/verbal GREs were too low for Mensa (unless they used analytical and verbal, and then I’d be golden), but they did get me into USC.

Fast forward to 2016. Last Saturday was test day. When I woke up at 5am on Saturday (far too early) with just the slightest headache, I thought I would head it off at the pass and took an Excedrin. Which seemed to work for a little while. When I got up for real an hour later, I took some ibuprofen. No migraine yet, but I could tell it might be coming. I had some coffee. That usually helps. Just in case, I took one last Excedrin on my way to the test. I did not take my usual migraine medication because I didn’t think I was actually going to get a migraine, and because it makes me loopy, and because I then have to pee every 15 minutes. TMI?

If I had been smart, I would have waited and taken the test another day. But I had already waited three months and thought that I would be OK. I have had headaches many days and gotten through the work I needed to do with little misadventure. By the time I was sitting in the test, however, the side effects of the drugs had kicked in without any actual relief. At first I was OK. A little shaky, a little headachy. A little spacy. I could do this!

The picture portions of the test (what item is different? what is the same?) were pretty easy. And although the pictures were a little blurry (and very tiny–not for older eyes!), I think I got them almost all correct. Three sections down. No problem. [As a side note–it was interesting to me that this test must be 40 years old. They had pictures of things that I could barely identify (I think that’s a slide rule… wow, a dial telephone with an attached handset!… what is that tube thing supposed to be?), so I can just imagine what the 15-to-30-year-olds in the room were able to identify.]

And then came the math, along with what was unfortunately now a migraine. There were two sections of math word problems that there was no way I was going to be able to finish, even if I could think properly, which I couldn’t. So there I was, head pounding, words blurring, math completely escaping me, if it had ever been there in the first place (special thanks to my daughter and Steven who tried to prep me a little). All I could do was think about my high school SATs and the abcddceba. I didn’t go that route this time, and tried to answer what I could, but I knew there was no hope that I did anything better than terrible on that section. There was another section as well that involved coins and money, and with my fuzzy brain, it took me a little too long to understand what they were asking me to do. By the time I got it and scrambled through the questions, I ran out of time with two left. So I guessed (no penalty in guessing).

The last three sections were vocabulary, analogies, and comprehension. I’m pretty sure I nailed them all (language is my thing), even though I was now having a surreal out-of-body experience. It was really quite fascinating. In a disconcerting sort of way.

There was also a second test (if you pass either, you can be in Mensa), which had 50 questions to be answered in 12 minutes. You were asked to do as many as you could, with no expectation (or so they said) that you would finish them all. The questions were also supposed to get harder as they went on, so they recommended we didn’t skip around. They were all “fill in the blank.” I figured out pretty quickly that I should answer all the language-based questions and skip right over the math. I finished all of those questions and went back and answered a few of the math, but by that time my head was filled with pain and cotton.

Migraines suck. It feels like they suck half my life away as well. It’s really too bad I got one on test day, and I imagine that the smarter, more Mensa thing to do would have been to postpone the test. But I didn’t because I didn’t realize until too late that it would get worse instead of better. Ahhhhh. Hindsight.

Update 8.1.16: It turns out, after all that, I actually passed… Maybe math skills are  overrated after all.

6 Responses to Mensa and Migraines and Math (oh my!)